anas
Muslim Businesses Blog
Food and energy security have always been important for China, but the pandemic has underscored these concerns.Original link
Continue reading

anas
Muslim Businesses Blog
"I think it's in all our interests to continue to find areas of common ground and that's, by the way, exactly what we do in the state of California with Tesla," Gov. Gavin Newsom told CNBC on Tuesday.Original link
Continue reading

anas
Muslim Businesses Blog
Apple paid Sony about $70 million for 15 years of streaming rights to the Tom Hanks film "Greyhound," which cost about $50 million to make, according to sources familiar.Original link
Continue reading

Profits up 16% at General Electric 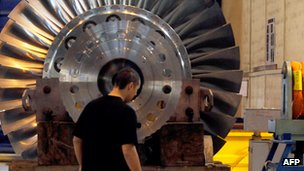 General Electric is refocusing on its industrial businesses, like making airplane turbines

General Electric has reported a 16% rise in first quarter profits, helped by a one-off gain from the sale of its stake in NBC Universal.

The conglomerate has been trying to put its focus back on core industrial businesses, which include aviation and energy infrastructure.

It said orders for its aviation equipment jumped 47%.

Orders for oil and gas equipment and services, such as turbines and plant maintenance, rose 24%, said GE chairman and chief executive Jeff Immelt.

"In growth markets, equipment and service orders grew 17%. We ended the quarter with our biggest backlog in history," he said. Orders grew to $216bn in the first quarter from $210bn in the fourth quarter of 2012.

In the first three months of 2013 GE was awarded a $620m maintenance contract for QGC's Queensland Curtis liquified natural gas plant off the east coast of Australia.

It also won a contract to provide power equipment for the Emirates Aluminum smelter complex in Abu Dhabi, and another maintenance contract for a LNG project in Russia.

But the company said it had been affected by weaker-than-expected sales in Europe, especially in sales of power and water equipment.

"GE's markets were mixed. The US and growth markets were in line with expectations. We planned for a continued challenging environment in Europe, but conditions weakened further with Industrial segment revenues in the region down 17%," said Mr Immelt.

"We always anticipated that the first half of 2013 would be our toughest comparison," he added.

During the quarter, the company sold its 49% stake in NBC Universal to Comcast for $18.1bn.

Blackstone pulls out of Dell bid 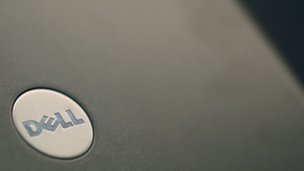 Blackstone has decided not to submit a bid for computer company Dell, citing falling sales and fears over the company's finances.

Blackstone said it was concerned by an "unprecedented" drop in PC sales.

Billionaire investor Carl Icahn and a consortium led by Michael Dell, the company's founder, are still in the bidding race.

Blackstone said it continued to view Dell as "a leading global company with strong market positions".

But it also said that the two worrying conditions meant it was nevertheless withdrawing its interest in the company.

Since Blackstone submitted its bid, Dell had reduced its operating income projections for the current year to $3 bn (£1.95bn), down from $3.7bn.

The bid has drawn opposition from some shareholders who believe the offer is too low. 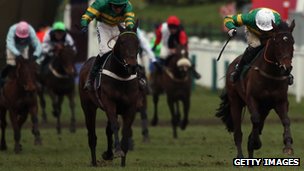 More sporting bets were made online than in its betting shops, with an increasing number placed through its mobile apps.

The company said that although it had a poor Cheltenham Festival, it had better luck in the Champions League.

It was the first time no English football team had been in the quarter finals since 1996.

As such, while the amount paid out to winning bets at the Cheltenham Festival was higher, the money punters placed on English teams to progress to the Champions League quarter finals and beyond all went into William Hill's coffers.

The firm said it had also enjoyed its best-ever result in a Grand National, which was won by the 66-1 outsider Auroras Encore.

"It has been a successful start to 2013 in trading terms", said chief executive Ralph Topping.

"Having grown our UK online market share from 10% to 15% over the last four years, we aim to increase our share and are making significant investments in marketing, technology and people to achieve that," he added.

On Monday, rival bookmaker Ladbrokes warned that trading had been worse than expected in the first three months of the year.

The firm blamed a drop in profits from the Cheltenham Festival and lower revenues from high value gamblers. It added that a high number of cancelled meetings, because of the harsh winter, had also affected its results.

Richard Hunter, head of equities at Hargreaves Lansdown Stockbrokers, said: "William Hill's performance and prospects are in stark contrast to the difficulties currently being faced at Ladbrokes.

"There are, of course, headwinds, such as the fierceness of competition in the sector and the generally pressed consumer, but these are challenges which the whole industry is facing," he added.

McDonald's has reported a drop in first quarter sales and says it expects sales to fall in April as well.

The company blamed a "challenging" environment, which included a harsh winter in both the US and Europe.

As consumers tighten their belts, McDonald's is coming under increasing pressure from its competitors.

Yum Brands, which owns Taco Bell, Kentucky Fried Chicken and Pizza Hut, has changed its US menus recently to appeal to the thrifty spender. Burger King and Wendy's have also redesigned their offerings.

McDonald's has been heavily promoting its "Dollar Menu", which many analysts say is eating into the company's profit margins.

The sales and profit figures came in lower than expectations, and McDonald's shares were down 2% in morning trading on Wall Street.

McDonald's said that underlying sales in the US fell by 1.2% in the first three months of the year, with operating income down 3%. Despite this, it said it had "outperformed the competition and increased market share".

In Europe, comparable sales fell by 1.1%, which the company blamed on the "ongoing economic uncertainty" in the region.

"For the month of April, global comparable sales are expected to be slightly negative," said McDonald's president and chief executive officer Don Thompson.

"We are confident that we have the right plans in place to differentiate the McDonald's experience and strengthen our business momentum for the long term." 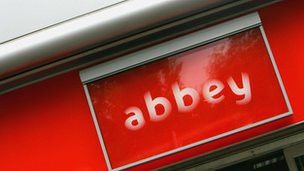 30,000 Abbey customers may get compensation
Continue reading the main story

Santander, the country's second biggest mortgage provider, says 30,000 of its customers may be due compensation, after errors made in 2008.

All were former Abbey customers, who were put on standard variable rate (SVR) mortgages after coming off fixed-rate deals.

But they were not told clearly enough that they could have transferred their accounts elsewhere.

Santander has already set aside £232m to cope with this and other issues.

In December 2008, the Bank of England cut base interest rates by one percentage point.

But instead of passing on that cut in full to its SVR customers, Abbey reduced its interest rate by just half a percentage point.

It should have then made it clear that customers were free to move, penalty-free, to other mortgage providers.

But many people may have believed that they were locked into their existing loan.

"We should have told customers they were free to leave and get a better deal elsewhere," a spokesman for Santander told the BBC.

In this case, Abbey customers affected can expect to receive similar amounts, depending on the size of their mortgage.

Following an agreement with the Financial Conduct Authority (FCA), Santander has agreed to write to 270,000 customers to explain more clearly what occurred in December 2008, and to help them understand whether they were affected.

The FCA said that letters sent out at the time were not clear, and affected borrowers may not have understood what was going to happen, or how the changes would affect them.

Santander is asking customers to wait and receive the letter before contacting them.

It said cases would be reviewed on an individual basis.

"The majority of our mortgage customers would not have suffered any detriment as a result of any lack of clarity in the original communication," the spokesman said.

GlaxoSmithKline (GSK) has been accused of market "abuse" by the consumer watchdog, the Office of Fair Trading (OFT).

The OFT alleges that the pharmaceutical giant paid rivals to delay the release their own versions of GSK's Seroxat treatment.

Alpharma, Generics UK and Norton Healthcare all received money not to enter the market with their copies of Seroxat, it said.

GSK said it "acted within the law".

"In fact, these arrangements actually resulted in generic versions of paroxetine entering the market before GSK's patents had expired," the company said in a statement.

Moreover, it added that "the OFT investigation covers matters that have already been investigated by the European Commission in 2005-2006".

"In March 2012 the Commission announced that it had formally concluded its enquiry with no further action," it said.

"The issues were also reviewed in the European Commission's 2008-2009 Sector Inquiry. Neither investigation resulted in any sanctions against the company."

The generic drug makers were attempting to supply the UK market with their versions of paroxetine, which GlaxoSmithKline brands as Seroxat, the OFT said. Seroxat is used to treat depression.

GSK accused them of infringing its patent, so to resolve this dispute Glaxo effectively paid the three companies off, according to the OFT.

"The paroxetine supply agreements under investigation were terminated in 2004," GSK said.

If proven, the allegations would be an infringement on the part of all the parties of competition law and on the part of GlaxoSmithKline an abuse of its dominant place in the market.

"The introduction of generic medicines can lead to strong competition on price, which can drive savings for the NHS, to the benefit of patients and, ultimately, taxpayers," said Ann Pope, senior director of services, infrastructure and public markets at the OFT.

"It is therefore particularly important that the OFT fully investigates concerns that independent generic entry may have been delayed in this case."

The firms will now be asked to respond to its allegations, before the OFT makes a decision on whether or not competition law has been infringed.

By accepting you will be accessing a service provided by a third-party external to https://www.muslimbusinesses.co.uk/

Direct Link
This site uses cookies. By continuing to browse the site, you are agreeing to our use of cookies. To find out more, please click here.